Telemicroscopy provides the opportunity to do digital live consultations. It enables experts to engage in direct exchange beyond spatial limitations. As opposed to Virtual Microscopy, it is not primarily focused on creating a digital image of a microscopic specimen, but rather to enable collaborative live viewing and processing of samples. This is realized through digital technology by transmitting microscopic live imaging to a screen. With a special software, a so-called streamer, a second person can also view the image via a monitor. Since it is a live stream, all parties have to access the programs at the same time, however, not from the same location.

What Are the Building Blocks of Telemicroscopy? 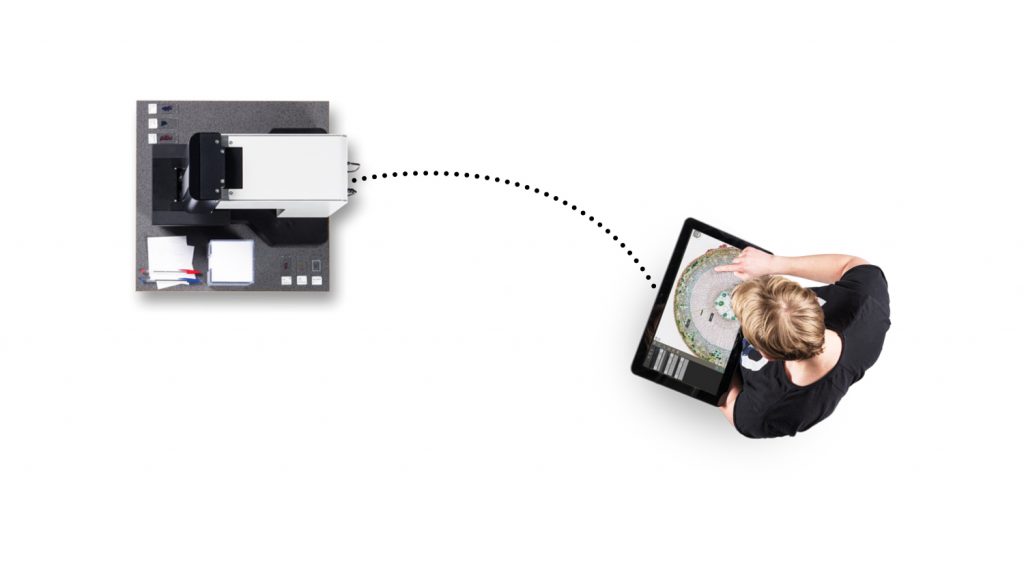 Operating microscopes by means of automation and robotization

Depending on the configuration level of the specific microscope, it can be controlled locally or remotely. If the specimen is to be moved, this must be done manually by actuating corresponding buttons and rotary parts. Microscopes with integrated motorization elements often allow for the XY stage and the Z axis to be controlled electronically.

Controlling the axes electronically can be performed locally, but also remotely. This means that the system can be operated from an off-site location and the slide moved remotely, making the necessity of having a microscopy specialist on site redundant. It is more than enough to have an assistant prepare the system and insert the slide under the microscope.

Of course, telemicroscopy as a function can also be used with samples that have already been scanned. In this case, no live stream is transmitted but rather the already digitized sample. If you would like to learn more about scanning slides, please have a look at our articles on ‘Virtual Microscopy’ and ‘High-Throughput Microscopy’.

To generate a digital microscopic image, it is necessary to transmit the microscope’s image to a screen. Various options to realize this exist.

One option is to use a microscope enhanced through a camera mounted on top of it. The camera is connected to a computer where the image is then shown on screen. Depending on the model, a camera is mounted in place of or directly behind the eyepiece.

Another option is to use a fully digital microscope. With this type of microscopy, the traditional eyepiece is no longer used. The microscopic image is being directly transferred to a computer screen. To achieve this, the system is equipped with a permanently installed camera. The microscope in and of itself is also controlled digitally via a software.

Streaming software serves to transfer live images and sounds from one computer to another. Several types of streaming methods exist:

The first category of streamer solutions permits passive participation and remote viewing. Normally, the connection is between a few up to numerous users. The second category of streamer solutions allows active participation and remote viewing, with users being able to actively control the system remotely. Usually, the connection is then between two users only.

Streaming software that is meant to be utilized for telemicroscopy should be able to transmit large and high-quality images reliably. Furthermore, it should allow remote control, making it possible for external experts to independently control the device from a remote location. Accordingly, a user, also referred to as sender, sets the system, generates the image, and transmits it. The second user, also referred to as receiver, then receives the image and is able to control the computer remotely.

For telemicroscopy to be possible, all parties planning to participate in a “conference” must have a computer with stable Internet access. To ensure that the Internet connection remains stable, that no interruptions occur and that the large image files can be transferred in good quality, the Internet line should be able to actively process at least 50 Mbit/s up and down stream. This means that the Internet line is capable of continuously transmitting a data volume of 50 Mbit/s in both directions throughout the duration of the stream.

To be able to work without any delays, a transmission rate between 30 and 60 frames per second, also called FPS, is ideal.

The abbreviation ‘Mbit/s’ indicates how much data can be transferred per second.

Have a look at the following simplified example:

If images are streamed with a 4K resolution and at 60 FPS, an Internet speed of at least 40 Mbit/s is required. If only half the Internet speed is available, i.e., 20 Mbit/s, a rate of 30 FPS is more likely to be expected.

Keep in mind, however, these numbers only serve as a rough guideline: in practice, the size of the transmitted image information depends on various factors and can thus fluctuate strongly.

Particularly in telemicroscopy, the performance capacity of the sender computer is tremendously important. The computer not only has to be capable of processing the digital microscopic images but also be able to transmit them. Before the image transmission, the images are compressed by the streaming software. They are packaged to enhance their transferability, which is only possible with a high-performing computer.

Therefore, the computer should be equipped with sufficient internal memory, a powerful processor, and a decent graphics card. This is the only possible way to guarantee smooth operations of the control software for the microscope as well as the streaming of the images.

The computer of the receiver does not necessarily have to be able to perform so high, as unpacking the images via the streaming software does not require as intensive computing.

When it comes to the quality of the image being transmitted, however, the monitor does play a big part on both sides, for sender, and receiver. The following should be considered: Screen resolution should be at the minimum at the same level as the resolution of the camera.

What Is Image Quality in Telemicroscopy Composed of?

Image quality is influenced by all building blocks of telemicroscopy: starting with the camera used to capture the microscopic images, to the screen resolution and streaming software, to the Internet speed.

All these factors interactively influence each other. The following image is meant to illustrate how the individual components affect the quality of the final image.

Benefits of Telemicroscopy vs. Analog Microscopy

Would You Like to Learn More About Telemicroscopy and Our Solutions?

We will be happy to advise you individually and personally. To do so, please send us your contact details using the form below and we will get back to you as soon as possible.

Since 1982, we have completed more than 15,000 installations of diverse systems and equipment around the globe. They are produced in Germany and manufactured according to the highest German engineering standards. Our core competence is the digitization of measurement and automation technology in the field of microscopy and micropositioning systems.