What is Virtual Microscopy?

Virtual microscopy provides opportunity to carry out microscopic examinations independently of time and location. The foundation for this are digitized microscopic samples, which can be viewed and edited on a screen. Those samples can be stored in databases and shared with a virtually infinite number of users. Depending on which software is being implemented, these virtual samples can have further information and annotations attached to them.

Virtual microscopy is an extension of telemicroscopy (see ‘Virtual Micropscopy’ by K. Glatz-Krieger, D. Glatz, M.J. Mihatsch). As opposed to telemicroscopy, however, no live transmission of the microscopic image is taking place. Rather by making use of appropriate camera technology, a virtual image of a sample is being produced, which can be saved as a file.

Many varying terms exist to describe digitized microscopic samples, e.g., virtual sample, scans, or Whole Slide Images. Yet what do they mean?

The terms Whole Slide Images (WSI), Scans and virtual samples are defined as fully digitized microscopy samples. To be able to image samples in their entirety, several individual high-res images are captured by a Whole Slide Scanner and stitched together to form a full scan. WSIs can be navigated on screen via a computer. Similarly to when working with a tissue sample under a microscope, the digitized sample can be magnified and analyzed.

By mounting a camera on top of a microscope, images captured through an analog microscope can be transmitted to a computer screen or scanned. This specific type of digitization was surely one of the first options available on the market. Depending on the model used, the camera is mounted in place of or directly behind the eyepiece atop the microscope. Generating images by means of this manual manner is often extremely time-consuming.

Slide scanners are thus being utilized to scan samples to generate a digital image of physical slides. Scanners can do scans only. They are operated via an accompanying software and can sometimes hold up to 1000 slides. If you would like to learn more about the functionalities of scanners, feel free to have a look at our article about ‘High-throughput Microscopy’.

What Does the Quality of a Digital Microscopic Sample Depend on?

The quality of a microscopic scan is influenced by many factors. Here, we are only going to mention those that seem most critical to us.

Just as with all microscopic procedures, quality is of great importance within virtual microscopy. Good quality of samples is essential for software-controlled processing.

Samples should be as equally thick/thin as possible, since the system automatically assigns focal points during the scan. Strong variations in thickness and resulting differing elevations can cause the scanner to jump between focal planes leading to out-of-focus areas in the finished scan. Readjusting these areas within the finished result is not possible.

Samples should be placed on their respective slides in such a way that they are located within the scannable area of the device. This fixed area is predefined by the system. Everything located outside the area cannot be captured, leading to incomplete scanning results.

Samples should be stained evenly. Just as with analog microscopy, staining samples evenly and avoiding overly intense colors are both crucial to visibility and viewability of cellular structures. Staining, however, can be readjusted within the finished scan – if admissible.

Further, air pockets, overlapping, and dust particles should be avoided as much as possible, as they could possibly lead to artefacts within the digital image.

As opposed to the human eye, computerized programs are not capable of recognizing errors and classifying them correctly. Therefore, it is important to check samples for the above-mentioned criteria before scanning.

Quality of the technology employed

First and foremost, it is important to understand what happens during a scan. No matter which method is being used, the process is similar for all types of generating images. The sample is scanned piece by piece and a large number of individual images are being taken – be it automatically or manually. Automatically means the system is equipped with an electric, software-controlled stage. Manually means the controls for moving the stage are operated by the user by hand. All of the images captured will be then processed by software and stitched together to form a full scan.

On the one hand, image quality is being influenced by software itself. To obtain a homogenous full scan it is crucial, for example, by which means the individual images are processed into a stitched complete scan. Here, the degree by which the individual images are overlapping each other is decisive for a homogenous image quality. With the aid of software-based object recognition images can be recalculated and seamlessly stitched together. The technical term within the industry for this process is the so-called ‘stitching’.

On the other hand, the workmanship of the built-in components is of significance. Depending on the quality of the parts used, e.g., objective, tube lens, camera, the quality of the individual images captured varies accordingly. This ultimately leads to better or worse image results.

How Does Quality Vary Depending on the Method Used?

Camera mounted atop the microscope

Scans that are generated by an additionally installed camera atop a microscope are often of rather poor quality. This is caused by the method of manually moving the stage to scan the sample. These microscopes were originally not intended for digitization processes. Regardless of the camera, the solution can be used for regular analog and manual microscopy.

Scans that are generated by a digital microscope are of mostly good quality. In addition to the scanning function, digital microscopes are also capable of generating a live view with which the user can perform live microscopic examinations on screen.

Slide scanners generally produce good quality scans in a short amount of time. For many scanners, the user can choose between faster scanning speed and higher image quality. With scanning speeds being higher, the risk of compromising image quality increases. 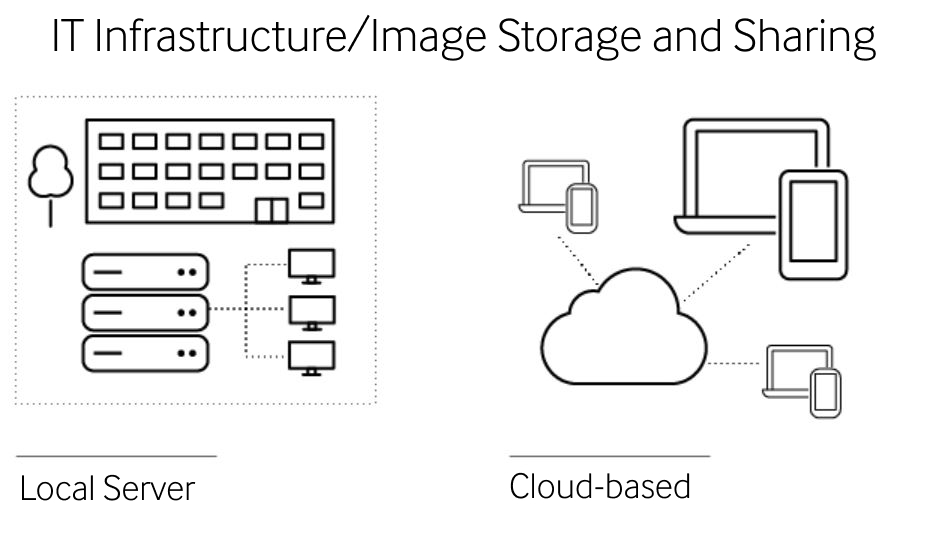 Several different methods for storing scans and sharing them with other users exist – regardless of the scan method used.

The simplest solution is saving the scans onto a data storage device on site, i.e., storing the files on a computer or an external hard drive. With this method, however, distributing the files is difficult, as only one persona at a time can directly have access to the images.

Storing scans on a shared main server, as is done, e.g., in universities and other educational institutions, provides the entire team with the opportunity to access the images. Hence, viewing of the images is made possible for several users at once and the number of users is expanded.

Web servers provide the easiest option for sharing scans with as many users as possible. To be able to achieve this, the files are uploaded to an Internet server and can then be accessed via a web browser. This method enables users to create varying user profiles, making the images only via a passcode-protected access available. This type of web-based server is often referred to as ‘Cloud’.

An appropriate viewing software is needed to be able to make use of microscopic scans to their full extent. Depending on the image format used only special software is able to process the images. These types of software, so-called viewing software, further offer the opportunity to analyze the scans. Various annotation tools enable users to, for example, to mark the images with lines and circles or written information can be added. In fact, it is even possible to integrate artificial intelligence (AI) into such programs. Making use of AI enables an automated analysis of certain structures and cells. Ideally, annotations and analyses can be stored attached to the specific image and easily reaccessed when viewing the scan.

Furthermore, it is possible to incorporate viewing software into a cloud, meaning that scans can not only be shared with other users via the web server but also be viewed directly on the platform. Additionally, further information to the images can be made available. This specific type of cloud combines all three functions of storing, sharing, and viewing, providing users with a good experience overall, as the individual parts merge into a holistic concept.

In theory, viewing scans can be done on any device, be it a big screen, smartphone, tablet, or laptop. However, the quality of the screen is naturally decisive when it comes to the display quality of the image.

Whole Slide Image of a mouse – scanned with the PreciPoint M8

What Technical Standards Should Be Met?

Internet speed is particularly important when it comes to generating a virtual slide. If the scans are intended to be processed via a cloud, the Internet connection should allow for at least 50 Mbit/s.

The abbreviation ‘Mbit/s’ describes how much data can be transferred within a second. Hence, having a fast Internet connection is helpful to keep the time it takes to transfer data to the cloud within reasonable bounds.

Have a quick look at the following sample calculations:

The file size of a scan generated with a magnification of 20x is 400 MB. With an Internet connection at a speed of 50 Mbit/s (corresponds to 6.25 MB/s), the full transfer of the file takes about 64 seconds.

To view the images within a cloud, however, does not necessarily require such a fast connection because viewing them does not require the software to transmit the whole of the file but rather the actual part of the image currently displayed on screen.

Depending on the screen resolution used (16 Mbit/s for Full HD and 64 Mbit/s for 4K), the bandwidth is thus only used briefly for the initial loading of the image section displayed. Following this, the bandwidth is not used up until navigating to a new location within the sample. Since most smartphones are equipped with a mobile data transmission of 4G (corresponds to up to 300 Mbit/s), viewing samples virtually while on the go is easily possible.

Screen resolution is particularly important when it comes to viewing and processing these high-res scans. As a rule of thumb: to achieve a good resolution, using a monitor whose resolution exceeds or equals the resolution of the scan is key. Therefore, using a resolution of at least 2.560 x 1.440 (QHD) is recommended.

Which Opportunities Does Virtual Microscopy Provide in Comparison to Analog Microscopy?

What to Consider Regarding the Implementation/Purchase?

Purchasing an appropriate scanning device for the digitization of specimens should be carefully deliberated. In some cases, making use of a scanning service where samples can be sent directly to a provider who will digitize them for the customer may be a sensible alternative.

Given the information above, four main methods for digitizing samples are crystallize: using a camera mounted atop the microscope, a digital microscope, a slide scanner, or a scanning service.

When choosing the best fit in terms of digitization methods, it is important to factor in several aspects.

What quality is to be expected for the microscopic images?

Would You Like to Learn More About Virtual Microscopy and Our Solutions?

We are happy to advise you individually and personally. Simply send us your contact details using the form below and we will get back to you as soon as possible.

Since 1982, we have completed more than 15,000 installations of diverse systems and equipment around the globe. They are produced in Germany and manufactured according to the highest German engineering standards. Our core competence is the digitalization of measurement and automation technology in the field of microscopy and micropositioning systems.